“The commemoration has changed the course of our nation, bridges of good faith have been built among all people and we must not let them disappear regardless of what has happened in the past.” 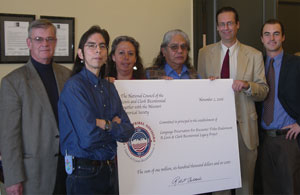 The Circle of Tribal Advisors and participating Tribal Nations created many significant legacies during the Lewis & Clark Bicentennial that will continue to benefit Indian people for countless generations to come. Among them:

In partnership with the National Council of the Lewis & Clark Bicentennial, Missouri Historical Society, Oregon Community Foundation, and the Endangered Language Fund, the Circle of Tribal Advisors created a perpetual endowment fund for Native Language Education and Revitalization. With proceeds from the surcharge on sales of the US Mint’s 2004 Lewis & Clark Commemorative Coin, COTA created the $1.6 million Native Voices Endowment: A Lewis & Clark Expedition Bicentennial Legacy for making annual grants to Tribal Language teachers, researchers, and programs. COTA member Tribes and other Tribes along with the Lewis & Clark Trail are eligible to apply for funding.

The National Park Service videotaped all programs by Tribal presenters in Corps II’s Tent of Many Voices. Those videotapes form the basis of a new website (www.lc-triballegacy.org), to be launched in March 2010, and series of curriculum guides being created by the Park Service in partnership with the University of Montana Regional Learning Project. In addition, all Tribal presenters will receive copies of their programs to help in preserving oral histories, educating future generations, and contributing to Tribal museums and archives.

During the bicentennial, Native People told their own stories in their own ways. That input continues to be far more valuable and interesting than just showing up to be the entertainment – like early bicentennial planners expected us to do. Mainstream scholars and media continue to consult and defer to Tribal historians, scholars, elders, and leaders.

The Tribes stirred things up during the commemoration, primarily in a non-confrontational way. As a result, the general public became, and continues to grow a bit less fearful and more understanding of Native peoples and our issues.

Native authors and poets enjoyed wider publication and readership during the bicentennial. Their books and articles will carry Tribal messages forward for many years to come.

The Circle of Tribal Advisors and its member Tribes created a time capsule of Tribal involvement memorabilia – films, books, videos, Tribal Flags, signature event items, brochures, programs, maps, articles, commemorative coins, CDs, DVDs, photographs, symposia proceedings, and much more – to be opened by our descendants as planning begins for the 250th Anniversary of the Lewis & Clark Expedition. COTA placed the time capsule with the Missouri Historical Society to keep safe for the next 50 years.

Tribal Legacies, by State and Tribe 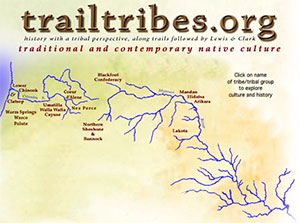 Sac and Fox Nation of Missouri

Going to the Sun Institute

Confederated Tribes of the Grand Ronde Community of Oregon

The Museum at Warm Springs

Wisdom of the Elders

Confederated Tribes and Bands of the Yakama Nation

Tribal Legacies Since the Bicentennial Concluded 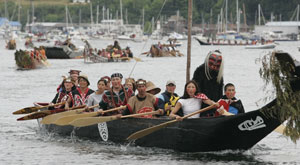 The following extraordinary Tribal Legacies had their origins in relationships that developed, programs that were initiated, and awareness that was raised during the commemoration. We applaud and congratulate those who created each of the following continuing legacies.

At the end of July 2009, after more than 200 years in exile until being invited back to the Saint Louis area to participate in the bicentennial, the Osage Nation of Oklahoma purchased Sugar Loaf Mound – the last mound of the ancient Cahokia Mounds complex that was held in private ownership and yet undestroyed by the advance of America’s westward expansion. Cahokia was the largest civilization north of Mexico City in pre-Columbian times. Acquisition of Sugar Loaf Mound gives the people of the Osage Nation a literal, physical connection to their ancient history and ancestral homeland.

In 2008, after decades of neglect, the US Army Corps of Engineers, at last, kept its 50-year-old promise to rebuild Celilo Village, which had been forced to relocate when the Dalles Dam flooded Celilo (the great Wy-am) Falls in 1957.

With traditionally carved, ocean-going canoes created during the bicentennial, the Cowlitz Tribe participates in the Tribal Canoe Journeys, a drug and alcohol-free program that brings together Tribal canoes from around the Northwest coast.

The Episcopal Church – Repudiation of the Doctrine of Discovery

Also in the summer of 2009, the Episcopal Church adopted a resolution repudiating the centuries-old Doctrine of Discovery, established by European monarchs and the Catholic Church, that awarded claim to indigenous lands to those non-Natives who first “discovered” them. In this way, Europeans, and later, Americans laid claim to the Native homelands of the Americas and other non-European, non-Christian areas of the world. The Episcopal Church has called on the United States and Great Britain to “disavow and repudiate publicly, the claimed validity of the Christian Doctrine of Discovery.” Tribal leaders quickly extended that call to Pope Benedict XVI.

Since its establishment by the Circle of Tribal Advisors, National Council of the Lewis & Clark Bicentennial, and the Missouri Historical Society in 2006, the $1.6 million Native Voices Endowment, administered by the Endangered Language Fund, has made grants to Tribal language programs and individuals.