Monticello and the University of Virginia hosted the event at Thomas Jefferson’s home in Charlottesville, Virginia.

The event commemorated the 200th anniversary of President Jefferson’s letter to Congress requesting funds to launch a “scientific” expedition in search of the fabled Northwest Passage to the Pacific Ocean, establish diplomatic relations with and collect ethnographic details about the West’s Native inhabitants.

First Flute: Our Role on the Hoop of Life: Kevin Locke (Lakota).

Many Nations – Many Voices: Panel exhibit created by the Circle of Tribal Advisors about Indian survival since the Lewis & Clark Expedition. Cultural demonstrations by representatives from COTA member Tribes.

Framing the West at Monticello: Original and reproductions of Indian artifacts owned by Thomas Jefferson.

Up From the Earth: The Mandan Way of Life: Virginia Discovery Museum exhibition on the culture of the Mandans as it existed in 1804.

Corps of Discovery II: 200 Years to the Future is launched by the National Park Service and hosted by Monticello. Chief Cliff Snider (Chinook), a direct descendant of Chief Comcomley who met Lewis & Clark at the mouth of the Columbia, is the first speaker in Corps II’s Tent of Many Voices. 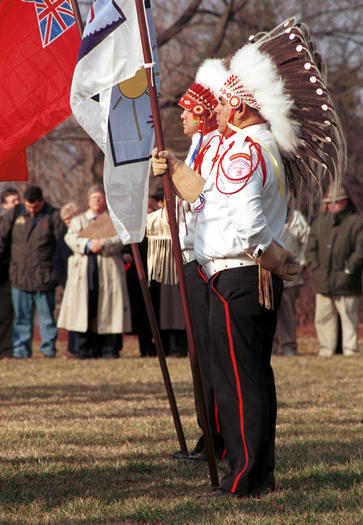